REC. The re-collection. For the base idea, it’s about a new visit. A new look on a part of my collection, from 2006 to today (older pictures are not good quality enough to be used). 31.348 candidates to be exact.
Not all the pictures will make it to the final collection, but some which have been unfairly kept away from everyone, some which deserve a new look, to be seen from a new angle, or to be enhanced, filtered, recolored… They will find here a second life.

REC marks a new beginning for me. A shift, a new perspective on and through photography.

All the picture will be published with anecdotes, information about the context, to bring some life back to these inanimate and forgotten shots. I hope you will have as much pleasure discovering or re-discovering these pictures than I had reviewing them once more.

A new photograph will be published each week. The previous photo will be added to my Flickr gallery. 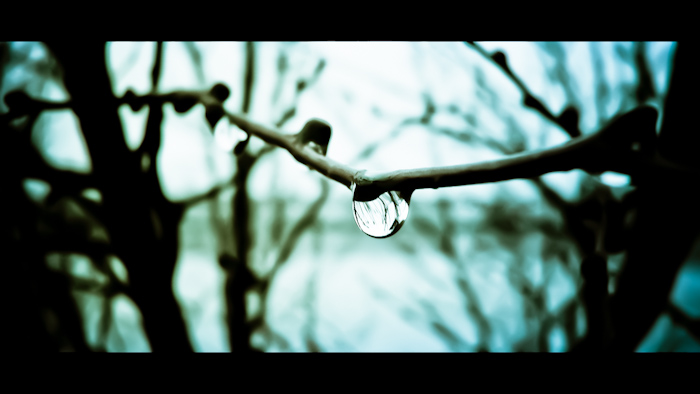 Second year of University in Bordeaux. Freezing cold covering the city. Blue atmosphere, without sensibility, a few days before the snow would start falling.

Already a regular of spending time on the right bank of the Garonne, I was seeking calm and a moment for myself on this side of Bordeaux, when I ended up in front of this drop of water. Captured then in my camera, the picture stayed untouched in the computer for years, probably because I never saw anything good enough in it.

More than four years later, the mood is different, and so is the reading of the picture. The drop has now a dimension: I see myself in it. Kind of a piece of solitude, in a complex and endless and overwhelming environment, I feel like this little guy. Nothing is clear, precise, defined ; but then, behind this wavering, an answer seems to appear, sharp and clear. Behind this unhappening moment, this hesitation, the picture is clear. You just have to know how to read it. Just a matter of point of view. Of perception.

More about this article

Give it a quick rating